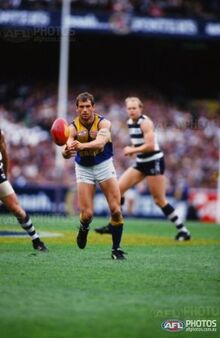 David Hynes’ biggest strength was his versatility, and during his time at West Coast he was used as a key forward, key back and an undersized but competitive ruckman.

Hynes would be a key player in Port Adelaide trifecta premierships in 1988, 89, 90. Especially in the 1990 thriller against Glenelg when Hynes' defensive work stopped numerous attempts by Glenelg at goal by working with Paul Rizonico and Jack Oatey Medalist (Best on Ground during a grand final) George Fiacchi. Hynes was drafted by the Eagles in 1988 but played in South Australia. He moved west at the end of the 1990 season. Hynes contribution to the Magpies helped Port impress the VFL/AFL during their fight to be the first South Australian representation in the national competition.

Despite playing 17 games for the season, the big South Australian missed out on the 1992 premiership. Two years later he was part of the 1994 premiership side, splitting the ruck duties with Ryan Turnbull as the Eagles beat Geelong to win their second flag.

After a fairly quiet 1995, Hynes moved to crosstown rivals Fremantle.

Hynes played just 13 games in the purple and West Coast netted Phil Matera and Brendon Fewster from the deal, making the trade a pretty big success. Hynes retired from AFL football in 1997, having just participated in South Fremantle's WAFL flag.

Hynes remained involved in football, working as West Coast's runner and then serving for several years as an assistant coach at East Perth. He took the senior coaching role at amateur club North Beach in 2013, where he served for five seasons before stepping down after the 2017 season.

Retrieved from "https://eaglepedia.fandom.com/wiki/David_Hynes?oldid=28592"
Community content is available under CC-BY-SA unless otherwise noted.