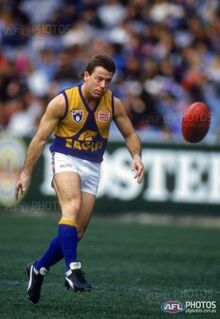 “Jewf” Hart is best remembered as a nuggetty back pocket, but in the early years of West Coast’s existence he was a nuggetty rover.

Hailing from Bruce Rock, Hart was recruited late into the inaugural West Coast squad after showing his wares at South Fremantle. Jewf had to wait until round 5 to make his debut, but from that point on was a regular in the senior side. He finished the 1987 season with 17 games and 23 goals.

In 1988 he played 20 games, including the club’s first-ever final. His standout performance came early in the season when he picked up 28 touches and 4 goals against Brisbane. He added another 19 games the following season as he started his transformation into a defender.

A popular member of the team, Hart missed much of the early part of the 1990 season but returned mid-year to play 18 games, including the unsuccessful finals series. In 1991 he overcame some late-season injury issues to play in the grand final.

An unfortunate series of injuries in 1992 limited Hart to just 9 games for the year, and although he was able to play in an earlier final against Geelong he missed out on the club’s first premiership. His 1993 was similarly frustrating, playing just 8 games for the year although he was one of the better-performed players in the Eagles’ two finals.

In 1994 Hart finally caught a break, throwing his injury problems aside to play every game for the year and win selection in the back pocket in the All-Australian team. His absence two years earlier, along with good friend David Hynes, was a driving force for his teammates in the grand final against Geelong as he at last obtained a well-deserved premiership medal.

Hart continued to be an important part of the side into his early 30s, achieving life membership in 1995 and being named in the back pocket in West Coast’s Team of the Decade in 1996. After a frustrating 1997, in which he managed just 7 AFL games but played in South Fremantle's WAFL premiership, Hart announced his retirement.

In retirement Hart stayed involved with the club as a runner under former teammate John Worsfold, before moving to Queensland to pursue a coaching career.

Retrieved from "https://eaglepedia.fandom.com/wiki/David_Hart?oldid=28669"
Community content is available under CC-BY-SA unless otherwise noted.