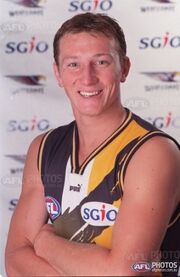 Antonowicz was taken as an underage selection in the 1997 draft (just one pick after A.Goodes), after missing much of the TAC Cup season through injury.

Given the number 4 jumper that had been vacated by the retired Peter Sumich, Antonowicz spent the 1998 season in Subiaco’s reserves and the 1999 season with Claremont without coming close to senior selection. It was not until 2000 that Antonowicz, now at East Perth, his third WAFL club in three years, was able to break into the Eagles lineup.

Having played at either end of the ground at various times during his development, Antonowicz was trialled in defence for three games during the 2000 season. His best performance was in the second of these matches, racking up 11 touches in a loss to Essendon.

Antonowicz was not able to add to his games tally during 2001 and was delisted at the end of the season.

Antonowicz spent two years playing for Werribee in the VFL, before fronting up for a number of country sides. He spent 2012 with Bendigo Football League side Gisborne before transferring to Bungaree in the Central Highlands Football League in 2013.[1]

Retrieved from "https://eaglepedia.fandom.com/wiki/David_Antonowicz?oldid=33326"
Community content is available under CC-BY-SA unless otherwise noted.