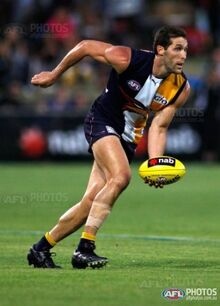 Consistently rated one of the best full-backs in the AFL, premiership defender Darren Glass provided invaluable leadership after taking over the captaincy from Chris Judd.

Originally from Perth, Glass was recruited as the number 11 draft pick in 1999, a pick obtained in the Jason Ball trade. He debuted early in 2000, playing 14 games for the year and being named the club's Rookie of the Year.

After playing 12 games in each of 2001 and 2002, Glass became a fixture in the side in the second half of 2003, taking over a key defensive role as Ashley McIntosh's career wound to an end. He continued that form in 2004, overcoming a late start to the season due to a shoulder injury to cement his spot in the backline, finishing with 18 games.

Glass played every game in 2005, including the losing Grand Final, and finished fifth in the club's Best and Fairest. Now one of the best key defenders in the league, he received external recognition in 2006 with his first All-Australian selection, additionally finishing runner up to Judd in the Best and Fairest, and kept Sydney captain Barry Hall goalless in the 2006 premiership decider.

He backed that up with an excellent 2007, winning the Club Champion award and being named All-Australian for the second straight year.

Named as captain after the departure of Judd, Glass led well despite the club's poor on-field performance in 2008, finishing fifth in the Club Champion count. He earned life membership early in the year when he played his 150th game, and continued his good form in 2009 with his second Best and Fairest award. Unfortunately, his 2010 season ended after just eight games when he was laid low by a groin injury.

Glass bounced back in 2011, winning a third Club Champion medal, just the third person to do so after Glen Jakovich and Ben Cousins. He also returned to the All-Australian side, then received the fourth AA selection of his career the following year, this time as captain. With the emergence of Eric MacKenzie as a quality stopper, Glass began to cede responsibility for the opposition's best forward to his younger teammate, concentrating on marshalling the defence and zoning off his opponent to help out his teammates. He brought up his 250th game in 2013, but began to slow and after struggling through the first half of 2014, he surprisingly announced his immediate retirement, stating that his body would not allow him to play games in consecutive weeks.

Glass finished his career with 270 games, behind only Jakovich and Dean Cox, and his 125 games as captain was behind only dual premiership skipper John Worsfold.

Glass joined the Adelaide coaching panel under former West Coast assistant Phil Walsh.[1] After spending some time working as a business strategy consultant, he signed with Hawthorn as an assistant coach ahead of the 2018 season.[2] Glass spent two years with the Hawks before returning to West Coast as list manager, replacing the departing Brady Rawlings.[3]

Retrieved from "https://eaglepedia.fandom.com/wiki/Darren_Glass?oldid=32979"
Community content is available under CC-BY-SA unless otherwise noted.