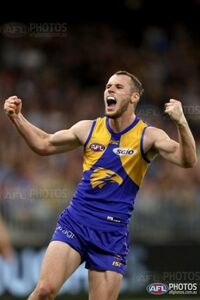 Victorian Daniel Venables has battled injuries after being selected with West Coast's first pick in the 2016 national draft, but nevertheless won a premiership medal in 2018.

Hailing from Keilor, Venables made the All-Australian under-18 side after a standout championship campaign, which included a game-winning goal against Vic Country. Despite a foot injury that kept him from testing at the draft combine, he was touted as a potential top-10 pick ahead of the draft. On being drafted, he was described as a tall and powerful midfielder with with an exciting combination of skills and natural ability around goal.

After spending much of his first pre-season recovering from his foot injury, Venables came up through East Perth's reserves before making a series of eye-catching senior appearances, playing primarily in the forward line. He was reportedly set for an AFL debut before suffering a case of "turf toe" that, although initially expected to only keep him out for a few weeks, eventually ruled him out of the entire second half of the 2017 season.

Venables was one of a number of youngsters brought into the Eagles side at the commencement of the 2018 season, and quickly impressed playing as a defensive forward with occasional stints in the midfield, before suffering an ankle injury that saw him placed on the long-term injury list. Returning through the WAFL, he cemented his spot ahead of the finals and turned in his best performance in the preliminary final against Melbourne, recording 17 touches and a goal while having a hand in several others, and won a premiership medal a week later.

Venables struggled for form in his third season, spending time in the reserves, before suffering a severe concussion against Melbourne in May. After struggling to recover, the club announced in July that he would not return in 2019. He was subsquently ruled out of the entire 2020 season, and the club announced at the end of the year that he would be removed from the playing list, although list manager Darren Glass said that the club remained hopeful that Venables had not played his last game in the blue and gold.[1] He did not have to wait long to be re-listed, with the club picking him up in the rookie draft.

Retrieved from "https://eaglepedia.fandom.com/wiki/Daniel_Venables?oldid=34252"
Community content is available under CC-BY-SA unless otherwise noted.