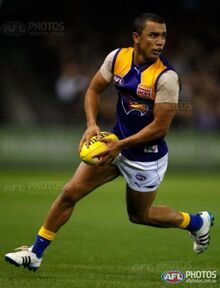 Tireless onballer Daniel Kerr formed a sensational midfield combination with Ben Cousins and Chris Judd during the early and mid 2000s, before taking over the #1 role when that pair departed at the end of 2007.

The son of Indian-born East Fremantle premiership player Roger Kerr, Daniel was a draft steal in 2000, taken with pick 18 which had been obtained as part of the Fraser Gehrig trade. The tough midfielder was a revelation and one of the few bright spots of a dismal 2001 season, playing 19 games and finishing a close second for the Rising Star award behind St Kilda's Justin Koschitzke.

Joined by Judd in his second season, the pair combined with captain Cousins to form arguably the best young midfield group in the league. Kerr finished second in the Club Champion award behind Cousins in 2002 and backed that up with top-five finishes in 2003 and 2004. Off-field it wasn't smooth sailing, however, with Kerr and Cousins fighting in a nightclub at the 2002 end-of-season function (resulting in Kerr pushing Cousins down the stairs, breaking his arm) and Kerr being convicted of forging prescriptions in 2004.

With the midfield trio being fed by champion ruckman Dean Cox, the Eagles charged to the 2005 Grand Final, ultimately losing by less than a kick with Kerr hobbling on one leg for most of the game. Kerr finished second in the Brownlow Medal, one vote behind Cousins who added to Judd's win from the previous year. After missing a handful of late-season games with a calf injury, Kerr was among the best in the decider the following year as West Coast won their third flag.

As Cousins missed the majority of the season due to off-field issues and Judd spent half the year hobbled by a groin complaint, Kerr stepped up his game in 2007. He again finished runner-up in the Brownlow and was named to the All-Australian side for the first time, although a finger tendon injury led to his absence from the side late in the year as the club bowed out of the finals in straight sets.

In the absence of his Brownlow-winning teammates, Kerr had a horror run in 2008. He was suspended for three weeks for a headbutt on opponent Scott West in his 150th game, then copped another three-week ban for striking before knee surgery ended his year on just 11 games.

That run of injury and silly suspensions continued for several more years, with Kerr struggling with the extra attention of being the side's number 1 midfielder. He managed only 11 games the following season thanks to an abdominal injury and a striking charge, and just four in 2010 when he ripped his hamstring off the bone against Essendon.

Kerr bounced back in 2011 to play 16 games, and then managed every game in 2012 for the first time in a decade. It was a false down, though, as he struggled through 2013 with a persistent knee injury that saw him left in the WAFL for several games, and announced his retirement at the end of the year.

Kerr hit the headlines in November 2014 when he was charged after trying to set petrol alight in an acquaintance's home, and spent five days on remand in Hakea Prison when his parents decided to go with tough love rather than bail him out.[1] He avoided a jail sentence for the incident, receiving a suspended eight-month prison term, and then moved to the country to work with Indigenous Services Australia. After making a number of one-off appearances for clubs across the country in 2017, he joined amateur club Thornlie as coach in 2018.[2]

Retrieved from "https://eaglepedia.fandom.com/wiki/Daniel_Kerr?oldid=27975"
Community content is available under CC-BY-SA unless otherwise noted.