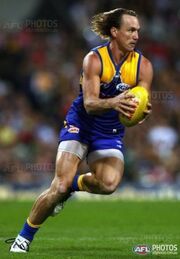 Tough and uncompromising, Daniel Chick was drafted by Hawthorn from East Fremantle, finding success as a Hawk before returning home to play an integral part in West Coast's 2006 flag.

Daniel Chick was a star for Hawthorn after being drafted in 1995, playing 149 games and winning the club’s best and fairest in 2000. Apart from his on-field exploits, Chick also made worldwide headlines in 2002 when he opted to have the top of his ring finger amputated after suffering repeated dislocations.

At the end of the 2002 season, Chick requested a trade home to Western Australia and came to West Coast in return for a top 10 pick.

Chick played 18 games in his first season at the Eagles, kicking four goals against Melbourne and being one of the side’s best in the elimination final loss to Adelaide. Having played predominantly as a half forward with the Hawks, at West Coast he showed the versatility to play wherever he was needed, be it forward, in the backline (often taking taller players) or as a tagger in midfield.

Chick played another 18 games in 2004 and then played every game in 2005, picking up 3 goals (and 6 tackles) in the preliminary final win over Adelaide and finishing in the top 10 in the club champion award for the only time in his Eagles career.

He was again an integral part of the side in 2006. He kicked 5 goals in an early win over Essendon but his most crucial contributions came on Grand Final day when he moved back onto Michael O’Loughlin as Adam Hunter swung forward. Chick put his body on the line in contest after contest, almost knocking himself out in a clash with Ted Richards and creating one of the most memorable passages of play in West Coast history with his smother, gather, handball and shepherd to create a Hunter goal in the final quarter.

The hero of the 2006 premiership struggled through the 2007 season. With his 31 year old body starting to show the signs of more than a decade of throwing himself into the contest, he also suffered from the distraction of having a central role in the Ben Cousins saga that enveloped the side that year. Although he managed 19 games for the season, in October the club decided that the combination of his age and off-field behaviour was too much to carry into 2008, and he was delisted.

Chick shifted to Subiaco after his AFL career was terminated, playing in the Lions' 2008 premiership before retiring after the club’s 2009 grand final loss. He hit the headlines again in the leadup to the 2015 Grand Final when a Melbourne newspaper published an interview with him that was critical of the club for its management of his injuries.

Retrieved from "https://eaglepedia.fandom.com/wiki/Daniel_Chick?oldid=27988"
Community content is available under CC-BY-SA unless otherwise noted.