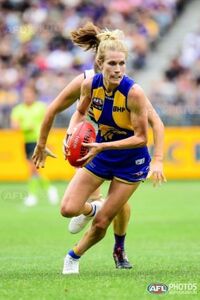 Star midfielder Dana Hooker was signed from Fremantle ahead of the Eagles' entry into the AFLW competition.

Hooker played with the Coastal Titans for several years, representing Western Australian six times and being named All-Australian in 2013. She was drafted by Fremantle ahead of the inaugural 2017 AFLW season, and was a shining light for the Dockers in their first season, winning the club's best and fairest. She was named All-Australian in 2018 and 2019, and finished runner-up in Fremantle's best and fairest in both years.[1]

Hooker was signed by West Coast in April 2019, as the first of up to eight players the club was able to sign from their cross-town rivals.

Retrieved from "https://eaglepedia.fandom.com/wiki/Dana_Hooker?oldid=32401"
Community content is available under CC-BY-SA unless otherwise noted.