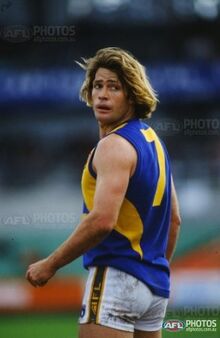 One of the more unsung driving forces behind the Eagles’ early 1990s success, Craig Turley was an endurance athlete capable of playing on a forward flank or in the midfield.

Turley made his debut in the season opener in 1989 and played 11 games for the year, demonstrating his potential with a 24 possession, 3 goal performance against Carlton.

Turls cemented his place in the side in 1990 and then exploded in 1991. The smooth-skilled runner played every game, averaging 22 possessions and a goal a game, and won the Club Champion award by a vote from Guy McKenna. He also finished runner up in the Brownlow Medal to Jimmy Stynes and was named on the interchange bench in the All-Australian team that year.

While back injuries hampered him in 1992, he still played 23 games and won a well-deserved premiership medal.

Turley shocked the WA footy world early in the 1993 season when he announced a premature retirement. Plenty of rumours as to the reasons behind his decision circulated at the time - Turley revealed years later in a documentary on the ABC that he had found out he was adopted and took time off to find his birth mother.

He returned in time for the 1994 season but not as the player he had been in 1991. Turley spent the best part of two months at West Perth mid-season, and was suspended for the first two weeks of finals for striking Carlton’s Greg Williams in the final home and away round. (Williams, despite having giving Turley a few good whacks to the gut to provoke the strike, got off scot-free and went on to narrowly win the Brownlow over Peter Matera). Turls was unable to win his spot back and missed out on the 1994 premiership as a result.

Still battling the back problems that had plagued him since 1992, Turley played 17 senior games in 1995 and showed only flashes of his best. At the end of the season, after playing in a premiership with the Falcons, he was traded to Melbourne in a straight swap for Andy Lovell.

Turley played 16 games for the Dees in the 1996 season but retired in the 1997 pre-season after a recurrence of his back injury.

Retrieved from "https://eaglepedia.fandom.com/wiki/Craig_Turley?oldid=28578"
Community content is available under CC-BY-SA unless otherwise noted.