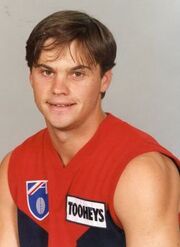 A goal-kicking rover, Craig Smoker failed to play a senior game for West Coast but managed a handful with Melbourne, before a successful career at State level in Victoria and WA.

A diminutive midfielder, Craig Smoker spent two years on West Coast's list without appearing in the seniors. He excelled at West Perth, leading their goalkicking in 1997 and caught the eye of Eastern States recruiters.

Traded to Melbourne, Smoker played 16 games in his first year at the Demons but just one more the following year. Melbourne delisted him at the end of 1999.

Smoker remained in Victoria for a period, playing for Williamstown in the VFL where he won a flag in 2003. He returned to West Perth in 2006, playing four more seasons for the Cardies before retiring. Smoker then went into coaching, spending nine seasons as a line coach with the Falcons before switching to East Fremantle ahead of the 2019 season.[1]