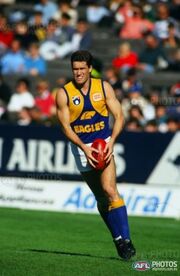 McGrath came up through Fitzroy’s junior ranks, captaining their under-19s to a premiership in 1982. He played 58 senior games for the Lions through the 1980s before being delisted due to a salary cap squeeze at the end of 1989.

Added to West Coast’s list, McGrath was called up midseason and played 11 games for the year, including the drawn qualifying final against Collingwood and the replay, before being dropped for the semi-final. His best performances came in rounds 17 and 18 when he kicked back-to-back three-goal hauls in wins over Carlton and Sydney.

After managing four games early in 1991, McGrath lost his spot and was unable to win it back. He was delisted at the end of the year.

The big Victorian continued to play in the WAFL for several seasons, switching from East Perth to Perth.

Retrieved from "https://eaglepedia.fandom.com/wiki/Craig_McGrath?oldid=23076"
Community content is available under CC-BY-SA unless otherwise noted.