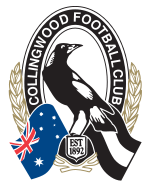 Collingwood was one of the foundation members of the Victorian Football League in 1897, and a competition powerhouse in the 1920s and 1930s. The club had won 13 premierships by 1958, but then entered a 32-year drought, losing eight grand finals during that period before finally breaking through for another flag in 1990. The Magpies won their 15th flag in 2010. Collingwood has developed the largest membership in the league and as a result is one of the most financially successful clubs in the AFL, although this has led to the Magpies being deeply unpopular among supporters of the other clubs.

Retrieved from "https://eaglepedia.fandom.com/wiki/Collingwood?oldid=35328"
Community content is available under CC-BY-SA unless otherwise noted.