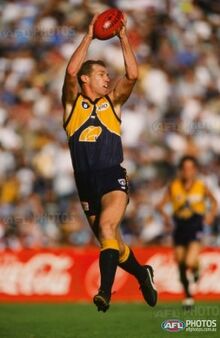 The Mr Fix-It of the 1990s premiership sides, Chris Waterman was an exceptional kick and able to play at either end of the ground as well as pinch-hit in the midfield.

Another of the “Magnificent Seven” that led WA to a Teal Cup victory in 1985, Muddy Waterman had to wait until 1988 to join the Eagles squad. He made his debut in 1988 but his breakout came in the 1990 finals series. After being dropped for the qualifying final replay against Collingwood , he returned for the semi-final against Melbourne and kicked a career-high 6 goals playing off a forward flank.

In 1991 Muddy played every match, including the grand final at Waverley, and received the Best Clubman award at the end of the year. The following year Waterman played in his second grand final, this time with a much better outcome.

Waterman tasted further success in 1994 as a member of the victorious grand final side, one of 15 players to have played in both premierships in the 90s.

He continued to be an important part of the team throughout the rest of the 1990s. Unfortunately, before the start of the 1999 season he was forced into a premature retirement due to a serious neck injury.

Waterman went into coaching, first in West Coast’s match day committee before joining Damian Drum at Fremantle. He then moved into coaching at WAFL level, acting as Peel’s senior coach for four seasons before crossing to Subiaco for three seasons.

Retrieved from "https://eaglepedia.fandom.com/wiki/Chris_Waterman?oldid=33360"
Community content is available under CC-BY-SA unless otherwise noted.