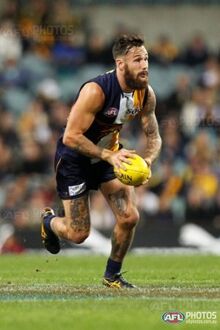 A top three draft pick in 2007, Chris Masten overcome stringent criticism to play over 200 games including the 2018 premiership.

The East Fremantle product captained his state and earned All-Australian honours at under 18 level before being drafted by West Coast, the club he had supported as a child, with pick 3 which had been obtained from Carlton in the Chris Judd trade. Before he had played a game for the club he hit the headlines for the wrong reasons after being involved in a brawl on the South Perth foreshore on Australia Day, as a result of which he was suspended by the club for the duration of the pre-season.

Despite that initial hiccup he forced his way into the team for Round 2 of his debut season, and played nine games for the year before being sent off for season-ending groin surgery. Masten became a fixture in the side in 2009, playing 19 games and earning a Rising Star nomination after picking up 38 possessions in a loss to Port Adelaide. He was awarded the club's Rookie of the Year award at the end of the year.

In 2010 Masten, now wearing Chad Fletcher's number 7 jumper, played the first six games before injuring his knee in a derby and missing a major chunk of the season. He returned through the WAFL and played seven of the last nine rounds.

The hard-running midfielder seemed to have taken a step backwards in 2011, struggling to force his way into a strongly-performing side although his cause was not helped by a knee injury suffered in the first quarter of round 1. After making his way back through East Fremantle he lost his spot a couple of times throughout the year, but was in the side for the club's first finals series since 2007.

Masten began to come of age in 2012, playing every game for the year and adding consistent goalkicking to his repertoire, kicking 20 goals for the season as well as recording 30-plus possessions on multiple occasions. His best performance came against GWS early in the season when he kicked three goals from 30 touches. His career-best year led to a top-10 finish in the Club Champion award for the first time.

Masten continued to build on his good form in 2013, picking up 39 possessions and a goal in an early win over Melbourne. Despite some injury problems late in the year (particularly a serious-looking ankle injury against the Bulldogs that ultimately only cost him a game and a half), he finished the year with 19 games and another top-10 placing.

His form seemed to taper slightly under new coach Adam Simpson in 2014. Although he played almost every game, Masten did not have the same impact on games as in previous years as he struggled to adjust to more of an outside role. He improved in 2015, having a solid year until the late-season derby when he was controversially suspended for two weeks for biting the arm of Docker Nick Suban. On his return in the final home-and-away round Masten injured his hamstring, resulting in him missing the opening final and being well below his best in the preliminary and grand finals.

Masten had a setback early in 2016, missing the NAB Challenge after injuring his ankle in an intra-club scratch match. After missing the first two games he returned to the side in round 3 and played every game from then on, marking his 150th game mid-season, but failed to replicate his best form.

After playing the first ten games of 2017, Masten fell out of favour and found himself at East Perth for much of the second half of the season, adding just three games after the bye. He bounced back in 2018, locking in a spot on the wing and playing almost every game, including the successful Grand Final. After making his 200th appearance early in 2019, Masten again was in and out of the side, having a couple of stints in the reserves, and after the Eagles' premiership defence ended in the semi-finals, the club announced that he would seek opportunities elsewhere.

Retrieved from "https://eaglepedia.fandom.com/wiki/Chris_Masten?oldid=31376"
Community content is available under CC-BY-SA unless otherwise noted.