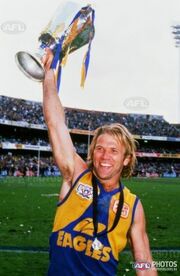 The golden-haired boy from Geraldton, Chris Mainwaring was an extremely popular player among fans and teammates alike during his playing days, and that continued in retirement as a media personality. His tragic death in 2007 at just 41 years of age shocked the Western Australian community.

Mainy played in a WAFL premiership with East Fremantle in 1985 as a 19 year old before being recruited into the newly-formed Eagles in 1987. An instant hit, he won the club’s first Rookie of the Year award as well as finishing third in the Club Champion award. Mainwaring finished third again in 1988 (coming equal 8th in the Brownlow Medal count that year) and then runner-up in 1989 behind Guy McKenna.

When Peter Matera hit the scene in the early 1990s, he, Mainwaring and Dean Kemp formed an awe-inspiring centreline that is still considered one of the best midfields of all time. Mainy typically lined up on the slightly choppier southern wing at Subiaco, allowing the athletic Matera the firmer surface on the northern side of the ground. The set-up paid immediate dividends with both Mainwaring and Matera named in the All-Australian side in 1991 (along with McKenna and Craig Turley). West Coast stormed to the minor premiership that season before faltering against a vastly more experienced Hawthorn side in September.

The 1992 season represented revenge for West Coast and Mainy was right in the thick of the action. He played every game, finished runner-up once again in the Club Champion award and created one of the enduring memories of the club’s first premiership win, ignoring a broken ankle and throwing aside his crutches on the bench to jump in elation as the final siren sounded.

1993 was a bit of a non-event for Mainwaring, with the aforementioned ankle injury contributing to a late start to the season. He bounced back in 1994, with the blonde wingman bringing up his 150th game mid-season, averaging more possessions than any other Eagle and proving instrumental in the club’s run to its second premiership.

After an injury-affected 1995, where he played just 9 games, Mainy had a ripper 1996. Named in the All-Australian side for the second time, he again just missed out on a Club Champion award, finishing just one vote behind winner Drew Banfield.

It all came crashing down in Mainwaring’s first game in 1997, the 193rd of his career, as he blew out his knee early in the match against Geelong. It wasn’t until round 20 in 1998 that he returned, a shadow of the player he once was. After an extended run at East Fremantle in 1999 he eventually limped his way to his 200th game before retiring at the end of the season.

In retirement Mainwaring forged an impressive career in the media, reading the sports news on Channel 7 as well as appearing on Mix 94.5. He also stayed involved in football, sitting on the selection panels of both the All-Australian side and the Rising Star award.

On 1 October 2007 Perth was rocked by the news that Mainwaring had died of an apparent drug overdose. He was 41.

The honours bestowed on Mainwaring in death were almost as numerous as in his playing career. His number 3 jumper (which had been vacated by Chris Judd just days earlier) was retired for three years as a mark of respect. The Best Clubman award, which he had won 10 years earlier, was renamed in his honour, as was the southern wing at Subiaco where he had spent much of his game time during his career. A further legacy was the Chris Mainwaring Legends Match, held annually for a number of years to benefit Telethon and featuring former Eagles players, other former VFL/AFL stars, local celebrities and Mainwaring’s children Zac and Maddie.

Retrieved from "https://eaglepedia.fandom.com/wiki/Chris_Mainwaring?oldid=28643"
Community content is available under CC-BY-SA unless otherwise noted.