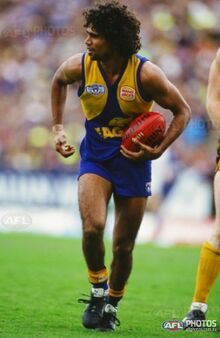 In addition to being one of the driving forces behind the Eagles' success of the 1990s, Chris Lewis was one of the trailblazers for today's indigenous stars.

Lewis first came to prominence during WA’s 1985 Teal Cup win as a member of the so-called “Magnificent Seven” along with future Eagles teammates Worsfold, McKenna, Sumich, Waterman, Peos and Watters.

Equal parts tenacious and silky-skilled, Lewis went on to become a member of the inaugural West Coast side that defeated Richmond in 1987. In the last game of that season he kicked a career-high 7 goals against St Kilda.

Lewis’ personal best season was probably 1990, when he picked up 9 Brownlow votes and the Club Champion medal, but he tasted the ultimate team success in 1992 and 1994 as a member of the victorious grand final sides.

Lewis played 215 games, a remarkable achievement given the amount of times he was suspended during his career. He was something of a target for opposition players and often got rubbed out after retaliating, particularly in his earlier years. His transgressions included some unusual incidents, such as being suspended for biting the finger of Melbourne’s Todd Viney in 1991.

His 259 goals has him currently sitting sixth on the Eagles’ all-time list .

After missing the entire 1999 season with a foot injury, Lewis attempted to play on in 2000 but managed just three games before announcing his retirement.

Lewis coached Swan Districts in 2007 before moving to Port Hedland. He remains involved in football by umpiring the reserves grade in the North Pilbara Football League.

Following his retirement Lewis has been honoured for his contribution to football by selection in the AFL’s Indigenous Team of the Century in 2005 and the West Coast Hall of Fame in 2011.

Retrieved from "https://eaglepedia.fandom.com/wiki/Chris_Lewis?oldid=32983"
Community content is available under CC-BY-SA unless otherwise noted.