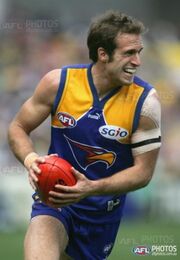 A question that continues to plague West Coast fans - which Chris Judd do we choose to remember? The dynamic, Brownlow Medal-winning premiership captain and midfield driving force? Or the mercenary who demanded a trade to Carlton for big money when the club needed him most?

After a stellar junior career in which he captained the Vic Metro under-18s, Judd was touted as a potential number 1 pick in the 2001 draft but concerns about his history of shoulder problems saw both Hawthorn and St Kilda pass on him, and West Coast were delighted to pick him with the priority selection they had received after their horrible 2001 season.

Given the number 3 jumper that had been vacant since Chris Mainwaring's retirement two years previously, Judd was made to earn selection through the WAFL. That process took just one week, Judd kicking four goals in a best-afield display with East Perth in his one and only WAFL appearance before being given his senior debut the following week. He had a terrific start to his AFL career, being nominated for the Rising Star after his first game and finishing third in the Club Champion award behind fellow midfielders Ben Cousins and Daniel Kerr, with whom he would go on to form one of the greatest midfield combinations of all time.

Proving impervious to the second-year blues, Judd played every game in 2003, finishing runner-up behind Cousins in the best and fairest and beginning to build his reputation as a matchwinner. The ultimate midfielder, big bodied and capable of playing inside and out as well as impacting on the scoreboard, Judd stamped himself on the national stage by demolishing the reigning premiers Brisbane at their home ground, kicking five goals in a memorable first half.

Appointed to the Eagles' leadership group in 2004, Judd went to even greater heights, averaging 22 possessions (most of them contested) and a goal a game. Shortly after his 21st birthday he was crowned the runaway winner of the 2004 Brownlow Medal. He also won the Club Champion award and All-Australian selection, both for the first time.

While not quite at that level, Judd had another outstanding season in 2005. He missed just one game (through suspension after striking pesky Saints tagger Steven Baker) and was judged best on ground in the Grand Final, becoming one of just a handful of players to win the Norm Smith Medal in a losing side.

At the start of 2006 Cousins was stripped of the captaincy after his much-publicised booze bus incident, and Judd somewhat reluctantly took on the role. The reasons for his reluctance were not completely clear as Judd continued to perform at his usual elite level, winning his second best and fairest and finishing fourth (one vote behind teammate Kerr) in the Brownlow Medal, as well as being selected in the All-Australian side. Judd was again at his best on Grand Final day with 28 touches and a goal, and became the second West Coast captain to hold the premiership trophy aloft, fittingly alongside the first captain John Worsfold, who then moved aside to allow Cousins to share the moment with Judd.

Unfortunately Judd struggled through most of 2007 with a persistent groin injury that caused him to miss games. In particular, in the second half of the season Judd was either typically in the coach's box during games or hobbling around the forward line. He played in the qualifying final loss against Port Adelaide, but probably shouldn't have, and was ruled out of the semi-final that ended in a heartbreaking extra-time loss to Collingwood.

Amidst massive public speculation over his future, Judd announced shortly after the Magpies game that he would not sign a new contract but would head back to Victoria. After a very public process in which he 'interviewed' prospective Melbourne-based clubs including powerhouses Collingwood and Essendon and his childhood favourites Melbourne, Judd nominated Carlton as his club of choice. The deal was done reasonably quickly despite West Coast's stated desire to get Carlton's number 1 pick and Carlton's stated denial that the pick was off-limits. In the end, West Coast received pick 3 as well as a second-round pick and promising young forward Josh Kennedy, a reasonable return although probably not reflective of Judd's standing as arguably the best player in the league.

Given the captaincy on his arrival at Carlton, Judd won the Blues' best and fairest in his first three seasons at the club, in 2010 adding a second Brownlow to his 2004 medal. He was also named in the All-Australian side for four consecutive years, including as captain in 2008.

Ahead of the 2013 season Judd handed over the captaincy to fellow midfielder Marc Murphy. Judd retired midway through the 2015 season after suffering an ACL injury, finishing his Carlton career with 145 games and 90 goals.

Retrieved from "https://eaglepedia.fandom.com/wiki/Chris_Judd?oldid=27974"
Community content is available under CC-BY-SA unless otherwise noted.