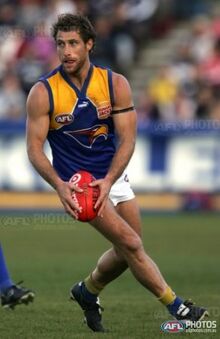 Hard running left-footer Chad Fletcher was one of the unsung contributors to the great Eagles midfield of the mid-2000s.

Despite not playing an AFL game in 1998, he was elevated to the senior list at the end of the year along with Laurie Bellotti.

Fletcher spent most of 1999 playing for Claremont under the host club arrangement, earning a debut against Richmond in the second half of the season, his only senior game for the year. He fared much better in 2000, starting the year in the side and playing 18 games, picking up a Rising Star nomination late in the season.

The left-footed wingman was a regular in the side from then on, playing 20 games in 2001 and finishing equal third in the club champion award. He backed that up with 18 games and another top-ten finish in John Worsfold’s first season in charge, and then another third place finish in 2003, providing an effective link in the star-studded midfield.

Fletcher had his best season in 2004, finishing second in the best and fairest and getting named on the bench in the All-Australian side. He played every game in 2005, earning another top-four finish behind only the big names in Cousins, Judd and Cox.

While he was down on form in 2006, he lifted for the Grand Final, being one of the side’s better contributors in the premiership win. Unfortunately he will be remembered more for the postscript to that victory, the prolific midfielder reportedly almost dying in Las Vegas on the postseason trip.

A knee injury delayed Fletcher’s start to 2007, and after coming back through Subiaco (his first appearances for the Lions in five years) he then missed a handful of games later in the year with a groin problem. While he avoided injury in 2008, his form continued to tail off and he spent time at Subi.

In 2009 it became clear that Fletcher was being used solely as depth. After playing the first three games of the year, he managed just one more game before announcing he would retire at the end of the season. With finals out of the question, Fletcher was recalled for the final round, getting a fitting send-off along with fellow premiership players David Wirrpanda and Adam Hunter.

In 2010 Fletcher played for Balmain in the Sydney Football League.[1] He later moved to Bali, where he worked as a fitness instructor in addition to selling his home-made macrame products.[2]

Retrieved from "https://eaglepedia.fandom.com/wiki/Chad_Fletcher?oldid=33363"
Community content is available under CC-BY-SA unless otherwise noted.