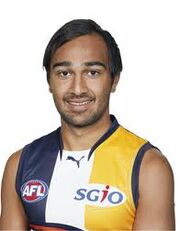 Callum Papertalk was a speculative rookie selection in 2012 after a season in East Fremantle's colts. He was delisted after one year on the rookie list.

An indigenous player with a good turn of speed and oodles of X-factor, Papertalk was picked up in the second round of the 2012 rookie draft.

He spent the 2012 season in East Fremantle's reserves, unable to break into their senior side. He was delisted at the end of the year.

Papertalk joined West Perth in 2015 but played just one senior WAFL match. He switched to Perth in 2016. After starting the 2018 season in the reserves, he left Perth and returned to his junior club Chapman Valley.[1]

Retrieved from "https://eaglepedia.fandom.com/wiki/Callum_Papertalk?oldid=25425"
Community content is available under CC-BY-SA unless otherwise noted.