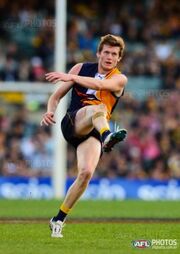 The younger brother of Mitch and Jarryd, Cale Morton was a top-4 draft pick who never quite fulfilled his potential at Melbourne. West Coast gave him a season to show why he'd been such a highly-rated junior, but he could manage just three games.

The Lake Grace product won the Larke Medal as the best player at the under-18s carnival in 2007. When West Coast acquired pick 3 in the Chris Judd trade, Morton would have come strongly into consideration. A complicating factor, however, was that his older brother Mitch had fallen out with the club and been traded to Richmond during the exchange period. (Interestingly, West Coast had obtained Mitch Morton as a father-son selection, before the AFL decided that his father Noel Morton's Claremont career did not qualify for the father-son rule, resulting in middle child Jarryd being selected by Hawthorn).

The youngest Morton showed a bit early in his Demons career, playing 40 games in his first two seasons and winning Melbourne's Best First Year Player in 2008. Unfortunately he tailed off after that, adding only 33 games in the following three seasons and spending time at Melbourne's VFL affiliate, Casey Scorpions.

At the end of the 2012 season, with his head possibly on the chopping block, he was traded to West Coast in return for a fifth-round pick. The Eagles had received the pick from Port Adelaide in return for Lewis Stevenson and, coincidentally, had originally been sent from Melbourne to Port for David Rodan.

Morton spent the majority of 2013 with East Perth under the new host-club arrangement, with West Coast trying to convert him into a running half back. His form for the Royals was patchy but enough to earn him a call-up late in the season. He came on a substitute on debut, and wore the green vest again in each of the next two matches. Morton's best effort came against Sydney, when he was subbed on at halftime and picked up 16 possessions and a goal.

After three weeks as the starting sub, Morton was sent back to East Perth. At the end of the season, he was delisted.

The three Morton brothers reunited at Perth in 2014. Cale returned to Victoria in 2015 to play for VFL side Coburg,[1] before switching to suburban club Diggers Rest in 2016.[2]

Retrieved from "https://eaglepedia.fandom.com/wiki/Cale_Morton?oldid=26795"
Community content is available under CC-BY-SA unless otherwise noted.