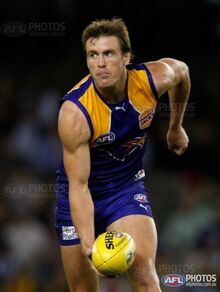 Dependable medium defender Brett Jones played over 100 games and won a premiership medal after being drafted as a mature recruit.

A talented junior cricketer, Brett Jones was picked up by West Coast in the 2004 rookie draft after a breakthrough season with Claremont. He was elevated off the rookie list to make his debut against Melbourne, acquitting himself well in a game now remembered for that Ashley Sampi mark. Jones played the next seven games before losing his spot due to an ankle injury.

Promoted to the senior list for the 2005 season, Jones was in the senior side from round 1 and played 22 games for the year. Unfortunately a leg injury forced him out of the preliminary final and he was one of a number of players missing from the grand final side.

Jones struggled in the first half of 2006, finding himself at Claremont more often than not. He won his spot back in round 15 and missed just one game from that point on, holding his place in the side for the finals series and putting in a solid contribution in the backline on Grand Final day.

Joined at the club by younger brother Chad in 2007, Jones had a career-best year. The no-nonsense defender played every game, picked up a career-high 30 possessions in a game against Carlton early on and finished in the top 10 of the Club Champion award for the first (and only) time.

Jones was looking to build on that form in 2008, and was one of the Eagles' better defenders in a horror season before a knee injury brought an early end to his year after 14 games. His 2009 wasn't quite as good, the halfback getting dropped back to Claremont midseason for the first time since 2006 and then injuring a hamstring on his recall to the senior squad.

After playing the first six games in 2010, an injured wrist interrupted Jones' run to his 100th game. He played another four games for the season, bringing up the ton in a home loss to Adelaide, but was dropped back to the WAFL several times as the Eagles put in their worst season in history.

Jones was unable to break into the side in 2011, although he was listed as an emergency several times. After playing in a Tigers WAFL premiership and receiving the Best Clubman award, Jones announced his retirement from all levels of football.

Jones returned to cricket after his football career ended, coaching the University grade club before taking a role as the WACA's Talent Manager. He took a similar role with Queensland in 2015.[1]

Retrieved from "https://eaglepedia.fandom.com/wiki/Brett_Jones?oldid=25667"
Community content is available under CC-BY-SA unless otherwise noted.