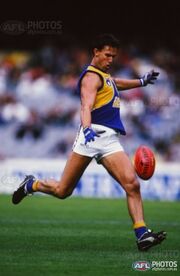 One of the all-time West Coast Eagles greats and a fan favourite, Brett Heady was known for his big leaps, his prominent ears and his unwavering willingness to put his body on the line time and time again.

Heady was a steal in the 1989 draft, somehow slipping to pick 92. (Subiaco teammate and close friend Dean Kemp lasted even longer, sliding all the way to pick 119). Generally playing at half-forward with occasional stints in midfield, Heady was an effective foil for spearhead Peter Sumich throughout his career.

“Jobby” made his debut early in the 1990 season against the Blues, playing 20 games in his debut season, with highlights including a best-afield display against the Swans in just his second senior game, kicking 4 goals in a win over Fitzroy and playing in all 4 finals.

Given the number 1 jumper the following year, Heady laughed off the notion of the second-year blues, playing every game for the season and kicking 47 goals for the year. His performances that year included a personal-best 7 goals against St Kilda, 5 goals in the club’s first game against the newly-formed Crows, and 4 goals in the grand final loss at Waverley.

Injury struck Jobby in 1992 and threatened to keep him out of the club’s premiership tilt. Entering the last month of the regular season Heady had played just 5 games. He regained his fitness in time to take his place in the team for the final four games and the qualifying final, although he missed the semi-final the following week. Recalled for the grand final in place of the unlucky David Hart, Heady was thrown into the midfield after halftime and was instrumental in West Coast seizing the momentum – and the lead – from Geelong in the third quarter and going on to win the club’s first premiership.

After a fairly uneventful 1993 where Heady played 19 games and West Coast bombed out in the semi-finals, he had a strong 1994 season, kicking 44 goals from 19 games including half a dozen in a loss to the Magpies. The courageous Heady was crucial in propelling the Eagles to another Grand Final, kicking another bag of 6 in the preliminary final win over the Dees. Although he had a relatively quiet game on Grand Final day he was nevertheless an extremely worthy recipient of a second premiership medal.

Heady notched up his 100th game early in 1995 and kicked another 30 goals from 15 games that season, including 5 goals in a best-afield display in the inaugural Western Derby and another 5 goals in the second derby later that year. A spate of injuries, mostly resulting from his constant fearless attacks on the ball, had unfortunately begun to take their toll by that point. His 1996 season was a virtual write-off, not taking the field until round 18.

Heady returned to something approaching his early-career form in 1997, playing 21 games and spending more time up the ground than in past campaigns. He struggled throughout 1998 with several injury-enforced layoffs limiting him to just 15 games. After an interrupted pre-season and playing clearly underdone in the opening-round Western Derby in 1999, Heady eventually succumbed to his injuries and announced his retirement after 156 games.

Somewhat surprisingly, Heady did not receive significant plaudits for his integral role in the dominant 1990s West Coast side – he never finished in the top three of the B&F and was never named in the All-Australian side. However, he finished his career as the Eagles’ 5th highest goalscorer and is an automatic selection on a half-forward flank every time the best West Coast side is named (including in the Team of the Decade in 1996 and Team 20 in 2006).

In retirement Heady has stayed involved in the club, acting as the team runner, in addition running an insulation business.

Retrieved from "https://eaglepedia.fandom.com/wiki/Brett_Heady?oldid=28641"
Community content is available under CC-BY-SA unless otherwise noted.