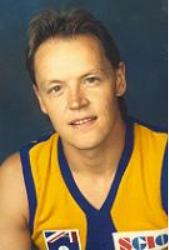 A slightly-built midfielder, Hutchinson captained Melbourne's premiership-winning under-19s side in 1983 and then won a reserves premiership with the Demons in 1984. He made his senior debut for Melbourne in 1985 but managed just one senior game despite winning the reserves' best and fairest. He spent 1986 with Frankston in the VFA before crossing to Perth to play for Subiaco.

After a few good seasons with the Lions, Hutchinson was added to West Coast's squad for the 1990 season. He was unable to break into the side, however, and was delisted at the end of the year.

Retrieved from "https://eaglepedia.fandom.com/wiki/Bret_Hutchinson?oldid=23080"
Community content is available under CC-BY-SA unless otherwise noted.