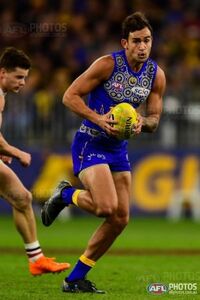 Having played his junior football for South Fremantle, Ah Chee was drafted by Port Adelaide in 2011, coincidentally with a pick obtained from the Eagles in the Brad Ebert deal.

Ah Chee failed to play an AFL game in his first three seasons at Port, eventually breaking into the senior side early in 2015. After managing just 27 games in his six seasons on their list, Ah Chee requested a trade at the end of 2017. Despite speculation he might seek to join younger brother (and former top-10 pick) Callum at the Gold Coast Suns, Brendon sought a trade to West Coast, with the two clubs agreeing to a swap of future picks.

Ah Chee had a delayed start to 2018 after suffering an ankle injury in a pre-season clash with his old side. After a handful of games for East Perth, he made his West Coast debut against the Giants but was in and out of the side and used all over the field. Dropped for the final time after the penultimate home-and-away match, Ah Chee was an emergency throughout the finals series. He spent much of 2019 unable to get any further than the emergencies, making his solitary senior appearance for the year in the forward line as a late replacement for an ill Josh Kennedy. He was delisted ahead of the draft, with the club committing to redraft him and fellow midfielder Hamish Brayshaw if they remained available.

On the rookie list in 2020, Ah Chee transformed himself into a forward and had the most productive season of his career, playing 16 of a possible 18 games.

28/2/18: Midfielder injured in clash with old side

Retrieved from "https://eaglepedia.fandom.com/wiki/Brendon_Ah_Chee?oldid=34363"
Community content is available under CC-BY-SA unless otherwise noted.