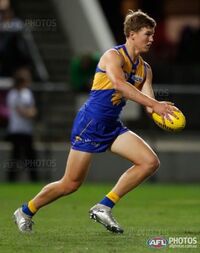 After playing senior football for Ports at the age of 16, Ainsworth moved to Perth in 2017 to play full-time for Subiaco and was rewarded with selection in the State under-18 side where he joined fellow draftee Oscar Allen in the All-Australian side before playing in the Lions' reserves premiership.[1]

Ainsworth impressed during the pre-season, and was selected as an emergency several times before finally making his debut against the Giants. He made two more appearances for the year, spending the majority of the season in East Perth's engine room.

Over the offseason, he underwent surgery to correct a deformity in his little finger - caused by a childhood accident - that was affecting his ball drop and subsequently his kicking.[2] He struggled to find his form of the previous year and did not add to his tally of senior games, although he performed reasonably in the midfield for West Coast's standalone WAFL side.

Despite being unable to ply his wares in the WAFL in the pandemic-affected 2020 season, Ainsworth was able to force his way into the senior side and played nine games, including the Eagles' elimination final loss, playing in a variety of positions including wing and defensive forward.

Retrieved from "https://eaglepedia.fandom.com/wiki/Brayden_Ainsworth?oldid=34365"
Community content is available under CC-BY-SA unless otherwise noted.