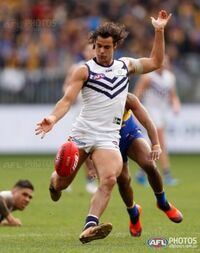 Originally from Burnie, in Tasmania's north-west, Grey was a surprise selection by Fremantle in the 2013 national draft, having concentrated on soccer until his draft year.[1] Grey spent most of his first three seasons playing for Peel Thunder, debuting at the end of the 2015 season, but was delisted at the end of 2016 after playing just three AFL games. Re-rookied by the Dockers, he had his best season in 2017, playing 14 games as a small defensive forward. He was delisted again at the end of 2018 after managing just four games, for a total of 21.

Grey was signed by West Coast's reserves side as their 'marquee' player, ahead of the club's entry into the WAFL in 2019.[2] Named a vice-captain under inaugural skipper Fraser McInnes, Grey spent 2019 alternating between the midfield and a forward role.

Retrieved from "https://eaglepedia.fandom.com/wiki/Brady_Grey?oldid=31518"
Community content is available under CC-BY-SA unless otherwise noted.