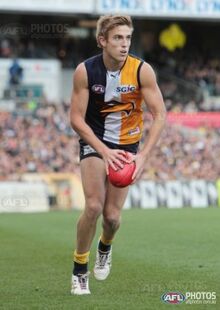 A clever utility, Brad Sheppard struggled for several seasons to cement a regular place in the senior side and live up to his status as a high draft pick, before finding a permanent home in defence.

Sheppard, the cousin of Australian cricketers Shaun and Mitch Marsh, won selection in a back-pocket in the All-Australian under-18 side in 2009 before being selected by West Coast with their prized top-10 pick.

He overcame a knee injury to make his debut early in 2010 and showed great promise. Playing primarily as a defender, he played 14 games for the year before an AC joint injury brought an early end to his season.

In 2011 Sheppard struggled to break into a settled Eagles' outfit, playing just six games for the year as West Coast made a surprising charge late into September.

He bounced back in 2012, after starting late and coming through East Fremantle Sheppard broke into the side in round 6. Playing further up the ground than he had earlier in his career, Sheppard played 12 games before succumbing to an ankle injury that, once again, saw his season over too soon.

He again struggled in 2013, with injuries (including shoulder and hamstring troubles) and indifferent form leading to Sheppard bouncing from the senior side to the WAFL.

He started the 2014 season at a new WAFL club, East Perth, but once given an opportunity in the ones he quickly cemented his spot to record probably his best season to date. Used almost exclusively in defence after being tried all over the field earlier in his career, Sheppard turned in some strong performances but once again he unfortunately failed to finish the season, with an ankle injury cutting his year short.

Sheppard turned in the best season of his career in 2015 after settling in the backline and playing every game. Regularly forced to punch above his weight against key forwards thanks to injuries to Eric MacKenzie and Mitch Brown, he did so with aplomb, finishing sixth in the best and fairest and being named Player of the Finals.

He consolidated his position in the backline with another strong season in 2016, playing every game and finishing in the top 10 in the best and fairest for the second straight year. Sheppard again played every game in 2017 and was a solid contributor in defence, his best game coming in Adelaide where he shut down Port's Robbie Gray and kicked a crucial goal. His good form continued throughout 2018, with Sheppard being spoken of as a potential All-Australian candidate, until misfortune struck in the opening final when he damaged a hamstring, ending a run of 95 consecutive games and knocking him out of the club's premiership push.

Looking to join his teammates as a premiership player, Sheppard was in career-best form during 2019 season, playing every game, leading the league in marks and earning selection in the extended All-Australian squad, although he unluckily missed out on the final side. He was rewarded with a personal-best third-place finish in the best and fairest.

Retrieved from "https://eaglepedia.fandom.com/wiki/Brad_Sheppard?oldid=35568"
Community content is available under CC-BY-SA unless otherwise noted.