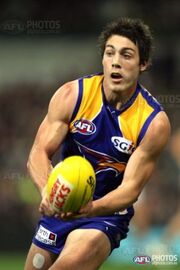 A talented key forward who was just a few inches too short for the role, Ben McKinley showed plenty of promise but could not consistently deliver.

A lifelong Essendon fan, McKinley was taken by West Coast with a pick acquired from North Melbourne in return for Daniel McConnell.

McKinley was allocated to East Perth and spent the 2006 season playing in the WAFL. He pressed for selection frequently in 2007 and was selected in the emergencies several times, finally making his debut against Port Adelaide as an injury crisis saw the Eagles forced to blood McKinley and Eric MacKenzie. After a thrashing at the hands of the Power, he returned to the Royals where he continued to rack up goals, kicking a total of 19 in a three-week period to win East Perth's goalscoring for the season.

2008 was McKinley's breakout season. After starting the season with the Royals, he was called up late for the round 3 derby and impressed with 3 goals, following it up with hauls of 4 and 5 in the next two games. He was one of the few shining lights in a dismal year on-field for the Eagles, kicking 42 goals to lead the club's goalkicking and winning the Rookie of the Year in a canter. His best effort came against the Bombers at Subiaco late in the season, when he kicked 7 goals to lead West Coast to a surprise win.

McKinley dropped off slightly in 2009, kicking 30 goals in 17 games and spending time at the Royals. His fall in form became more pronounced in 2010, with the Victorian managing just 16 goals from 10 senior games, although he continued to kick large bags at WAFL level. It became apparent that the side could not accommodate two undersized forwards, and Mark LeCras was outperforming McKinley significantly.

At the end of the season, he sought a trade to North Melbourne and the club was happy to let him go for a late pick.

McKinley struggled at North, playing just two games (including the season-opener against his old club) in 2011 and none at all in 2012 before being delisted.

After being delisted McKinley signed to play in the VFL with Werribee, the North Melbourne-affiliated club where he had spent most of the past two years.[1] He retired from football to become a lawyer, remaining as Werribee's runner in 2014.[2]

Retrieved from "https://eaglepedia.fandom.com/wiki/Ben_McKinley?oldid=25414"
Community content is available under CC-BY-SA unless otherwise noted.