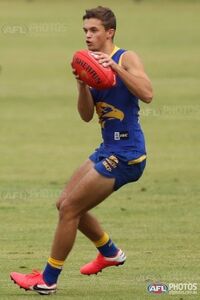 Johnson, a cousin of ruck great Dean Cox and an Eagles supporter growing up,[1] played in WA's winning under-18 side before making his senior debut for West Perth late in the year. On being drafted he was described as having speed and a powerful kick.[2] His first season was wrecked by injuries including a shoulder problem and osteitis pubis, although the absence of any reserves football in 2020 would have limited his opportunities in any event.

Retrieved from "https://eaglepedia.fandom.com/wiki/Ben_Johnson?oldid=34150"
Community content is available under CC-BY-SA unless otherwise noted.