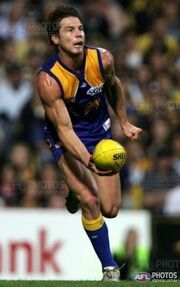 One of West Coast's greatest players, Ben Cousins will sadly be remembered for his spectacular fall from grace after the 2006 premiership.

The son of former Geelong and Perth player Bryan Cousins, before he had even graduated from Wesley College Ben was the subject of intense competition between West Coast, Fremantle and Geelong, all of who had the ability to sign him as a father-son selection. History will show that Cousins chose West Coast and went on to become a great of the club, before spiralling into drug addiction and destroying his Eagles career.

Cousins was made to wait until round 4 of his rookie season to make his debut, but had an immediate impact with 2 goals and remained in the side for the rest of the season. Used mainly as a clever small forward, with occasional midfield stints, Cousins kicked 34 goals in 20 games including a five-goal haul against St Kilda that earned him a Rising Star nomination. He ultimately won the Rising Star, the first (and so far only) Eagle to do so, although he was somehow pipped for the West Coast Rookie of the Year award by Andrew Donnelly.

Despite missing a string of games with an ankle injury, Cousins continued to improve on the field in 1997 as well as gaining in popularity. In 1998, now almost a full-time midfielder, he earned the first of many All-Australian selections and finished runner-up in the Club Champion award. Cousins backed that up in 1999 with a third-place finish and his second All-Australian jumper. The silky-skilled centreman began to forge his reputation as an elite runner, picking up a large chunk of his possessions in the final quarter of games as opponents began to tire.

In 2000 he finished fourth in the best and fairest despite playing just 17 games. After playing his 100th game in the final round of 2000, Cousins was appointed co-captain alongside veteran Dean Kemp for the 2001 season.

Cousins was virtually the sole shining light in a horror 2001, winning the Club Champion award in a landslide, finishing fifth in the Brownlow Medal and being selected in the All-Australian team for a third time. With Kemp’s injury-enforced retirement, Cousins became the sole skipper in 2002 and led the side back to the finals, assisted by young midfielders Daniel Kerr and Chris Judd. He was rewarded with a second Club Champion medal and yet another All-Australian jumper.

Despite another ankle injury in 2003 Cousins won a third straight best and fairest, again leading the team to the finals where he kicked 3 goals in the loss to Adelaide. A back injury kept him out of the side for most of the second half of 2004, but he was able to return in time for the elimination final.

In 2005, Cousins had possibly the best season of his career. He made his 200th AFL appearance, kicking 4 goals and earning maximum Brownlow votes in a big win over Brisbane at Subiaco. He went on to win the Brownlow by a single vote ahead of Kerr, before later that week captaining the club to its first Grand Final since the 1994 flag. While Cousins wasn’t able to add a premiership medal to his overflowing trophy cabinet (well, not yet), he did add a fourth Club Champion award and a fifth All-Australian selection (as vice-captain).

2006 started disastrously when news emerged during the pre-season that Cousins had done a bolt from a booze bus while returning home from a friend’s wedding. Although his only charge was obstructing traffic, he was stripped of the captaincy following the incident. Despite the off-field turmoil, he continued to perform to the usual lofty standards on the field. Cousins was again picked as an All-Australian, finished third in the Club Champion and as the side’s “spiritual leader” was welcomed onto the dais alongside new captain Judd to hold up the 2006 Premiership cup.

If he thought his 2006 preseason was controversial, 2007 blew it away. The club announced in March that Cousins was suspended indefinitely, with it later being revealed (to the surprise of no-one) that he had a substance abuse problem. After a lengthy absence from the game including a much-publicised trip to California to attend a rehab clinic, Cousins returned to the lineup late in the season against grand final opponents Sydney. As a near-capacity crowd applauded what he had overcome, Cousins picked up 38 touches to show he had lost none of his on-field class. After playing six games in the run-in to the finals, disaster struck in the qualifying final against Port as Cousins ripped a hammy. The image of a distraught Cousins hobbling down the race at Football Park remains the last picture of him as an Eagle, as with Judd and Kerr also missing the following week the Eagles went down to Collingwood in extra time and fell out of the finals in straight sets. In October, just days after acting as a pallbearer at the funeral of Chris Mainwaring, Cousins was pulled over in Northbridge and arrested for drug possession. Although the charges were eventually dropped, Cousins was sacked by the club and subsequently deregistered for 12 months by the AFL.

While his off-field issues mean he will always be a polarising figure, Cousins’ on-field record speaks for itself. Despite his West Coast career being cut short, he remains in the club’s top 10 in both games played and goals scored. His four Club Champion awards equals Glen Jakovich’s record, and his six All-Australian selections places him among the very elite of modern-day players.

After spending 2008 out of football, Cousins announced a desire to return to the AFL when his ban expired. Several clubs, notably Collingwood and St Kilda, expressed an interest but backtracked after doing their due diligence. At the last minute, Richmond rolled the dice on him, taking the troubled midfielder with the final pick in the pre-season draft. Cousins played 32 games in two seasons for Richmond before retiring, managing generally to stay out of trouble and earning plaudits during his time at Tigerland for his willingness to mentor his young teammates.

Sadly, Cousins had a number of very public issues in the years after his football career ended, culminating in his imprisonment in March 2017 for charges including stalking his ex-partner and drug possession. He was released in January 2018 and given a part-time job in West Coast's community and game development department.

Retrieved from "https://eaglepedia.fandom.com/wiki/Ben_Cousins?oldid=33331"
Community content is available under CC-BY-SA unless otherwise noted.