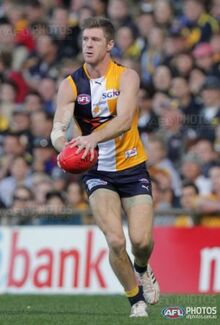 Renowned for his physical style of play, Beau Waters was a strong contributor for a decade although his physicality resulted in numerous injury layoffs, and eventually led to his premature retirement at the age of 28.

After playing senior football for West Adelaide as a 17 year old and being named as an All-Australian under-18, Waters was West Coast's first pick in the 2003 national draft. Allocated to Claremont, he quickly earned a debut against Essendon and played 10 games for the year, although a thigh injury cost him a berth in the finals. He received a Rising Star nomination for his 25-possession game against the Bulldogs.

2005 was a write-off, with Waters not appearing at any level due to persistent osteitis pubis. He returned in 2006 (after a pre-season setback following an unwise hip and shoulder on a taxi), and became an integral part of the side's defensive unit, playing 23 games for the year. Waters also began to forge a reputation as a hard man, copping a two-week suspension for a bone-jarring bump on Lion Robert Copeland. Despite being the youngest player on the field, Waters had an influential Grand Final, amassing 26 possessions and taking a number of important marks late in the match as West Coast held on for their third premiership.

He added another 20 games in 2007 but was one of many important Eagles on the sidelines as the side fell to Collingwood in extra time in the semi-final. 2008 brought a return to Waters' injury problems. After another two-week suspension for a bump on Collingwood's Shane O'Bree, he was given a rare game at Claremont where he suffered a dislocated left elbow. The serious injury wrote him off for the rest of 2008, and then all of 2009 after he suffered a recurrence of the injury during training. In a small silver lining, he was awarded the Chris Mainwaring Best Clubman medal for 2009.

The rugged defender returned to the side in 2010 and was one of few bright sparks for the Eagles in their wooden-spoon year, playing nearly every game and finishing third in the Club Champion award. He was rewarded by being named as Darren Glass' vice-captain for 2011, but the injury bug struck early in the season when he suffered another dislocated elbow, this time to his right arm, laying a tackle against Port. The injury kept him out of most of the season, although he was able to return in time for the club's push to the preliminary final.

Given a clean run in 2012, the popular Waters had a fantastic season and was rewarded with selection in the All-Australian squad for the first time, as well as receiving the AFLPA’s Most Courageous Player trophy (shared with Geelong’s Joel Selwood). At the pointy end of the season, though, his body once again let him down, with a fractured foot in the elimination final ending his finals campaign after less than a half of footy.

The injury pattern continued once in 2013, as Waters missed two weeks with a quad injury, came back for a week, then missed two more weeks with a groin, came back for another week, missed a month with a quad injury, managed three consecutive games on his return, then was ruled out of the return derby with a knee injury before going in for season-ending shoulder surgery. Complications from that shoulder operation ended up keeping him out for the entirety of 2014, and when he suffered another setback with his shoulder in the 2015 pre-season Waters saw the writing on the wall and announced his retirement, at just 28 years of age and after just 120 of a possible 257 games.

Retrieved from "https://eaglepedia.fandom.com/wiki/Beau_Waters?oldid=31865"
Community content is available under CC-BY-SA unless otherwise noted.