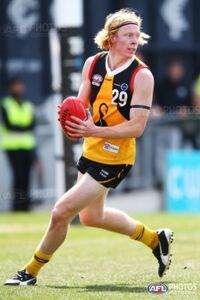 Originally from the Mornington Peninsula, Williams was touted as a first round pick after dominating in the ruck for Dandenong in the TAC Cup but slipped as clubs looked to midfielders. On being drafted he was described as being quick and agile with a great leap, and being capable of also playing as a key forward. Bailey's father Paul, also a ruckman, spent time on Carlton's list as a backup for champion Blue Justin Madden but was unable to break through for an AFL debut.[1]

Williams impressed in his first season with the Eagles, playing every game for the reserves and taking on more ruck responsibility as the year progressed. He was also named an emergency for the senior side on several occasions and travelled to Alice Springs with the side, but did not make his senior debut.

Retrieved from "https://eaglepedia.fandom.com/wiki/Bailey_Williams?oldid=31232"
Community content is available under CC-BY-SA unless otherwise noted.