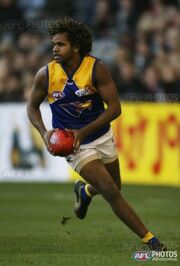 An exciting small forward, at times Ashley Sampi had superstar written all over him but fitness struggles and personal problems meant that he was unable to fulfil his complete potential.

Drafted early in the 2001 “superdraft”, Sampi made his debut midseason against Geelong in 2002 and played three more games late in the season, including the elimination final against Essendon. His breakout season came in 2003, when he kicked 31 goals in 21 games and formed an unconventional but effective partnership with fellow small forward Phil Matera. Sampi had a couple of notable moments in the 2003 season: firstly kicking 4 goals in a derby and being voted the winner of the Ross Glendinning Medal only to have Glendinning himself announce Michael Gardiner as the winner, and secondly kicking a goal from a set shot after the siren to salvage a draw against the Bulldogs.

2004 was more of the same, with Sampi kicking 32 goals from 22 games, including a career-high 5 goals against Port Adelaide. One undoubted highlight came against Melbourne, when he took Mark of the Year on the heads of Andrew Embley and a couple of Demons opponents.

Despite a foot injury that resulted in him missing a stretch of games in the middle of the year, Sampi had a reasonable 2005, kicking 20 goals. He was selected in the Grand Final but failed to kick a goal, his most memorable moment coming in the final seconds when he was part of the pack contesting the mark famously taken by Leo Barry – photos of the moment clearly showing defender Tadhg Kennelly with a big handful of Sampi’s jumper.

2006 started poorly with Sampi struggling (even by his usual standards) for fitness in the preseason. Despite that, he played the first seven games before being dropped back to South Fremantle after a poor run of form. He was recalled later in the season for another five games, but was again dropped as selectors preferred a young Mark LeCras and a pinch-hitting Steve Armstrong in the small forward role. One week after kicking 3 goals in a losing WAFL grand final, a dejected Sampi was forced to watch from the sidelines as Armstrong won an AFL premiership medal.

Sampi’s off-field issues really hit home in 2007. He managed just eight games for Souths before heading home to the North West to deal with significant personal problems, including the death of his cousin and the very public break-up of his relationship. Sampi later revealed that he had battled alcohol addiction and depression during this dark period.[1]

After being delisted at the end of 2007, Sampi did a pre-season with Melbourne but was not picked up, and spent a season with Port Fairy in country Victoria. After some tough times, by 2013 he had got his life back in order and was working FIFO while playing for Armadale in the amateurs.[1] He signed with country side Toodyay for 2018.[2]

Retrieved from "https://eaglepedia.fandom.com/wiki/Ashley_Sampi?oldid=27999"
Community content is available under CC-BY-SA unless otherwise noted.