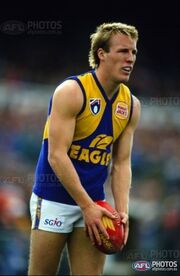 Ashley McIntosh was a rangy and athletic key-position player capable of playing at either end of the ground. While best remembered as a suffocating fullback, he was used forward regularly to great effect, particularly during his earlier years.

Wiry and deceptively strong, McIntosh made his debut in the middle of the 1991 season, kicking 2 goals against Richmond. He held his spot for the rest of the year, appearing in a Grand Final before his 19th birthday.

In 1992 McIntosh again split his time between defence and attack, kicking a bag of 6 against the Bears and another 4 against the Bulldogs as the Eagles charged to the flag. McIntosh was one of three teenagers (along with Glen Jakovich and Mitchell White) to win a premiership medal as the Cup left Victoria for the first time.

McIntosh spent more time up forward in 1993, kicking 25 goals for the year including a five-goal haul against Brisbane and a handful of three and four goal tallies. In 1994 he kicked 22 goals, but in the Grand Final he lined up on Billy Brownless in defence, playing an important role en route to his second premiership medal.

Plagued by leg injuries for much of his career, McIntosh played just 10 games in 1995, mostly as a forward, before bouncing back to play every game in 1996. At this time he transitioned to being a fulltime fullback after Michael Brennan’s retirement, and was named in a back pocket alongside Brennan in West Coast’s team of the decade.

1998 was McIntosh’s best season by far. After a series of blanket jobs on opposition full-forwards, including names like Dunstall, Lockett and Lloyd, he was rewarded with the Club Champion medal and selection at fullback in the All-Australian side.

McIntosh continued to be an integral part of the side for the remainder of the decade. His importance was illustrated in 2001 when he missed 10 games with a thigh injury – the club lost all 10 games as they plunged to the lower reaches of the table.

After consecutive elimination finals appearances in 2002 and 2003, McIntosh announced his retirement, handing over the mantle as the club’s premier fullback to Darren Glass.

In 2006 McIntosh was named at fullback in Team 20, relegating Brennan to a pocket.

Retrieved from "https://eaglepedia.fandom.com/wiki/Ashley_McIntosh?oldid=28651"
Community content is available under CC-BY-SA unless otherwise noted.