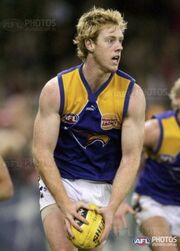 A talented lead-up forward, continual soft-tissue injuries limited Hansen's contributions at AFL level, although he was an important part of the 2006 premiership side.

The son of longtime ABC commentator Clarke Hansen, Ashley was taken by West Coast with the club's fourth and final pick in the 2001 'superdraft', after Chris Judd, Ashley Sampi and Mark Seaby.

Hansen spent his first two seasons at West Coast playing at WAFL level with Swan Districts, where he led the side's goalkicking in 2003. He was finally called up for a debut against the Pies as a replacement for another injury-prone key position player in Travis Gaspar. Hansen kicked 4 goals in just his second game, and played six matches before injuring his hamstring, a state of affairs that would prove all too regular throughout his career.

2005 was probably the best season of Hansen's career. He managed a career-high 20 games (despite missing a month late in the season with a groin injury) and kicked 24 goals to win the club's Rookie of the Year and anoint himself as the Eagles' latest great white hope at centre-half-forward.

Injuries, generally to the hamstring, limited Hansen to 14 games in 2006. Underlining his importance to the side's forward structure, the Eagles won all 14 games in which he played. Fortunately, after missing the final month of the regular season and the qualifying final loss to Sydney, Hansen was back on deck for the rest of the finals series, ensuring West Coast would be victorious on the last Saturday in September.

In 2007 Hansen again played 14 games, missing a couple of months in the middle of the year with a finger tendon injury before a now-customary hamstring injury a couple of weeks out from the finals. After missing the heartbreaking loss to Port Adelaide in the qualifying final, Hansen returned for the home semi-final but lasted less than a quarter before his hammy pinged again. He did gain the distinction in 2007 of winning the first ever Chris Mainwaring Best Clubman award, the award having been renamed in honour of the late, great wingman after his untimely death in October of that year.

In addition to his unreliable body, Hansen faced a new obstacle in 2008 in the form of Josh Kennedy. When the former Blue arrived at the club, Hansen's centre-half-forward spot was the most obvious place for him. Hansen nevertheless was preferred at the start of the season but quickly fell victim to his old nemesis, the hamstring injury, opening the door for Kennedy. Hansen returned after the halfway mark of the season, generally working in tandem with Kennedy while the side experimented with big Quinten Lynch on a wing.

Hansen struggled throughout 2009, managing just nine games as he spent extended time at Swan Districts (as well as, of course, the injured list). His AFL career seemed to be at the crossroads in 2010 when, after just two early season games, he was left in the WAFL despite hauls of 5, 7, 7 and 7 goals in a month. Of course, he didn't help himself by injuring a hip at training in the week after his third consecutive seven-goal game. The hip injury eventually cost him a large chunk of the season and any hope of a recall, although he was able to return to the Swans' side in time to play in their premiership win.

Despite playing just two AFL games for the year Hansen was nonetheless surprised to be delisted at the end of the year, perhaps because he was still contracted for 2011. For that reason, West Coast was forced to wait until after the national draft to delist him, giving them a pre-season draft selection which was used on Blayne Wilson.

Hansen continued with Swan Districts for two seasons, kicking 110 goals in 30 games, before taking up a role as a development coach with the Western Bulldogs in 2013.[1] He was appointed coach of the Bulldogs' reserves side Footscray in the VFL in 2015. After leading Footscray to a premiership in his second season, he rejoined the AFL side's coaching panel as an assistant.[2]

Retrieved from "https://eaglepedia.fandom.com/wiki/Ashley_Hansen?oldid=28000"
Community content is available under CC-BY-SA unless otherwise noted.