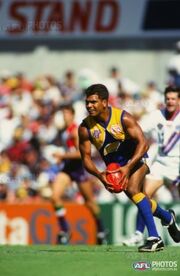 A talented but frustrating flanker from West Perth, Blurton played just a handful of games in his three years at the club.

Blurton played three games in his rookie season, but managed just four more the following year and then three games in the middle of 1997. His best performance came early in 1996 at the WACA when he kicked 2 goals from a dozen touches in a loss to the Bears.

At the end of the 1997 season Blurton was traded to Richmond. He played 14 games in the yellow and black before being delisted at the end of 1999.

Retrieved from "https://eaglepedia.fandom.com/wiki/Ashley_Blurton?oldid=28665"
Community content is available under CC-BY-SA unless otherwise noted.