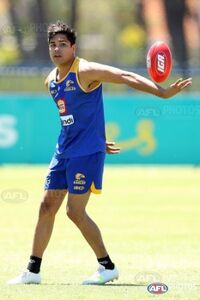 Originally from Broome, Treacy moved to New South Wales as a junior to join the Sydney Swans' academy, but returned to Cable Beach after injuring his ACL in 2017.[1] After winning the West Kimberley Football League's best and fairest in 2018, he joined Claremont in 2019 before being drafted by the Eagles as a potential replacement for the suspended Willie Rioli.

Despite the absence of Rioli and a number of other small forwards during 2020, Treacy was unable to force his way into the senior lineup, his cause not helped by the inability of the club to field a reserves side during the pandemic-affected season. At the end of the year, he was delisted having not made his senior debut, although he did appear in one pre-season match.

Treacy returned to Claremont for the 2021 season, alongside fellow delistee Francis Watson.[2]

Retrieved from "https://eaglepedia.fandom.com/wiki/Anthony_Treacy?oldid=34181"
Community content is available under CC-BY-SA unless otherwise noted.