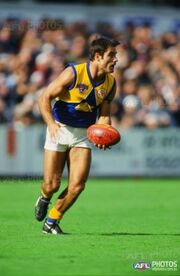 Anthony "Andy" Lovell was an industrious midfielder who played several seasons for West Coast in the mid-1990s after a successful career at Melbourne.

Originally from Glenorchy in Tasmania, Lovell played 121 games for Melbourne including the 1988 grand final before crossing to West Coast in a straight swap for Craig Turley.

An old-fashioned ruck-rover, Lovell was an instant success in the Eagles’ midfield in 1996, playing 23 games and racking up several hauls of 30-plus possessions including 34 against his old club early in the year. He tailed off a little in 1997, though he did manage back to back games of more than 30 touches against Hawthorn and, once again, Melbourne in rounds 4 and 5.

Injuries cruelled his 1998 campaign as he managed just 4 games. Lovell bowed out of AFL football at the end of the year.

His time at the club wasn’t done, however. Lovell served as an assistant coach before becoming coach of East Perth. He later returned to Melbourne to coach VFL side Sandringham. Lovell joined expansion team Gold Coast in 2010 as an assistant coach under old teammate Guy McKenna, where he remains as of 2018.

Retrieved from "https://eaglepedia.fandom.com/wiki/Andy_Lovell?oldid=28645"
Community content is available under CC-BY-SA unless otherwise noted.