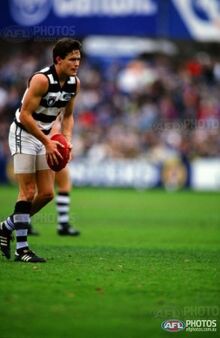 A lightly-built midfielder/half-forward, Andrew MacNish was probably the least well-known of the “Magnificent Seven” that led WA to victory in the 1985 Teal Cup competition. He then won All-Australian selection at the State of Origin carnival and a premiership with Subiaco in 1986 before being recruited into West Coast’s inaugural squad.

MacNish played in the first game against Richmond, kicking three goals for the match. It set the scene for a successful 1987, with MacNish playing 14 games and kicking a few more bags, including 5 goals against the Saints in the final rounds.

Injuries unfortunately meant that MacNish was not able to build on that promising first season. He didn’t play for West Coast again until late in the 1989 season, when he returned to kick three goals against the Swans and managed to string six games together. That was it for him as an Eagle, not managing a game in the next two seasons and getting delisted at the end of 1991, despite playing well enough to win Subi’s best and fairest that year.

MacNish made a return to the AFL in 1992, when he was picked up by Geelong in the mid-season draft and moved to Kardinia Park. He played three games for the Cats, including a five-goal, best-afield display against the Bears.

He then returned to Subiaco where he played on until 1996, retiring just short of 200 games for the Lions.

Retrieved from "https://eaglepedia.fandom.com/wiki/Andrew_MacNish?oldid=22507"
Community content is available under CC-BY-SA unless otherwise noted.