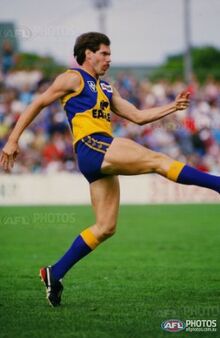 Perhaps best-known as another dour, dependable full-back in the Michael Brennan mode, Lockyer spent a large chunk of his (and West Coast’s) first VFL season in the forward line, kicking 17 goals in 14 games including a 4-goal haul at Carrara against the Bears.

Originally from Northampton, north of Geraldton, “Barge” had a career year in 1991 when he played in 20 games including the losing grand final at Waverley.

Unfortunately for him, the development of some outstanding young key position players like Glen Jakovich, Ashley McIntosh and Mitchell White forced Lockyer out of the side. He played just 2 early-season games in the 1992 premiership campaign and none in 1993 before being delisted when list sizes were cut back from 52 to 40 for the following year.

Lockyer has gone on to have a successful coaching career, particularly in underage competitions. He coached East Fremantle’s seniors before taking over their colts side, as well as coaching the state under-18s. He spent several years as the WA-based recruiting manager at Collingwood, before returning to coach the WA under-18s in 2015.

Lockyer's son Jordan spent three years on Sydney's list, but did not play a senior game and was delisted at the end of the 2014 season.

Retrieved from "https://eaglepedia.fandom.com/wiki/Andrew_Lockyer?oldid=23005"
Community content is available under CC-BY-SA unless otherwise noted.