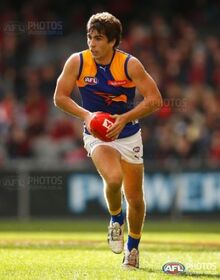 Hard-running link-up midfielder Andrew Gaff took little time to cement his spot in the side after arriving from Victoria as a top-4 draft pick.

After starring for Oakleigh and Vic Metro, Gaff was picked up by West Coast with the pick they received for their wooden-spoon finish in 2010 (the incoming Gold Coast club had been gifted the first three picks). He was given the number 3 jumper that had been temporarily retired after the death of Chris Mainwaring.

The classy left-footer made his debut in the opening round of 2011 as a late replacement, starting as the sub. He wore the green vest in four of the first five games before being sent to South Fremantle, where he promptly showed he belonged at the higher level by picking up 34 touches. After his recall lasted just a week, he had a longer stint at Souths before returning to the senior side in round 17, holding his spot for the remainder of the season and the finals and getting a Rising Star nomination for his 31 possession, 2 goal game against the Bulldogs.

There were no second-year blues for Gaff, with the young midfielder playing every game in 2012 and averaging nearly 25 possessions a game. Gaff finished fifth in the Club Champion award, one spot behind fellow 2010 draftee Jack Darling

His increased profile meant extra attention from opposition taggers in 2013 and Gaff struggled as a result, with his average disposals dropping below 20. He did get off the chain on a few occasions, and finished top 10 in the best and fairest for the second straight year.

Gaff had a slow start to the 2014 season and was still prone to being tagged out of games. He still had some solid games and found some form in the back end of the year, playing some of his best football for the club in back-to-back wins over Adelaide and Collingwood. The Victorian product finished fourth in the John Worsfold Medal count, and celebrated by signing a new deal to keep him at the club a few more years.

2015 was a career-best year for the hard-running midfielder, who averaged nearly 30 possessions a game and was rewarded with the Worsfold Medal and selection in the All-Australian side for the first time. Gaff brought up his 100th senior game midyear and the Grand Final, in which he was the Eagles' best, was his 104th consecutive game, equalling Dean Cox's club record.

Gaff was slightly down the following year, but was still judged to be in the best 40 players in the league by the All-Australian selectors, and in the club's top three performers by the Worsfold Medal voters. His form appeared to dip after his club-record 113-game unbroken streak came to an end when he was concussed against Port Adelaide. Gaff played every game in 2017 and continued to rack up plenty of possession - over 100 more than any of his teammates - but again his impact on games was not as great as in his All-Australian year.

He bounced back in 2018. Playing more of an inside role, he was on track for another All-Australian jumper and possibly even a Brownlow Medal before, in the late-season Derby, inexplicably throwing an off-the-ball punch that broke the jaw of Docker Andrew Brayshaw, younger brother of Hamish. Despite showing instant and palpable remorse, pleading guilty and arguing that he had only intended to strike Brayshaw in the chest, Gaff copped an eight-week suspension, the longest any Eagle had ever received and the equal-longest handed out by the Tribunal since the turn of the century. The ban ruled him out of any involvement in the club's finals campaign. Although he missed out on a premiership medal as a result, he still received his second All-Australian selection. After intense speculation that he would join North Melbourne as a restricted free agent on a lucrative deal, shortly after the Worsfold Medal presentation he announced that he would re-sign with the club.

Gaff started the 2019 late due to serving the remaining two weeks of his suspension, and took a few weeks to find his feet before recapturing the form that made him an All-Australian. He finished the year as the Eagles' leading disposal winner and was named in the extended AA squad, although he missed out on the final side. With game-time reduced during the pandemic-affected 2020 season, Gaff's endurance running remained a weapon as he barely rested, He again led the club in disposals and was again selected in the 40-man All-Australian squad, also finishing runner up to Nic Naitanui in the best and fairest.

Retrieved from "https://eaglepedia.fandom.com/wiki/Andrew_Gaff?oldid=35284"
Community content is available under CC-BY-SA unless otherwise noted.