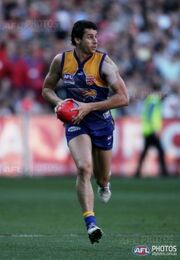 Talented wingman Andrew Embley played 250 games for the club but will be remembered primarily for his Norm Smith Medal-winning effort in the 2006 Grand Final.

Drafted late in the 1998 draft as a 17-year-old, Embley made his debut in the opening round of 1999 and held his spot for six of the first seven games of his rookie season. He played nine games for year but spent the latter part of the year at Claremont under the host club arrangement.

Back at his junior club Swan Districts in 2000, Embley added another 13 games and showed his potential with a four-goal haul against Port Adelaide which earned him a Rising Star nomination. Generally playing off a half-forward flank, he continued to improve over the next couple of years. Embley's real break-out year came in 2003 when he kicked 31 goals for the year, more than anyone bar Phil Matera. His performances that season included a career-best five goals against Carlton as well as a best-afield four goal effort against Collingwood, and resulted in a fifth-place finish in the Club Champion award.

In 2004 Embley was added to the leadership group as a vice-captain to Ben Cousins. He also began to move into the midfield, making a name for himself as a hard-running wingman. Along with Michael Braun and Chad Fletcher he became an important foil to the star midfield trio of Cousins, Judd and Kerr. Despite missing a handful of games in the middle of the year with a knee injury, Embley again finished in the top 10 of the best and fairest, and was one of the Eagles' best in the bad elimination final loss.

Injury again struck in 2005. One round after turning in the best game of his career, a three-goal, 35-disposal performance against Melbourne, he suffered a broken foot that kept him out for a couple of months, though he was able to return in time for the finals.

Embley was at his best in 2006, equalling his 2003 effort with 31 goals. A shoulder injury late in the year caused him to miss the first final, but he was back for the semi-final and turned in a fantastic finals series. His efforts in the Grand Final, which hincluded two goals, 26 disposals and a couple of critical marks late in the game, earned him a Norm Smith Medal.

Groin and hamstring injuries limited him to just 13 games during 2007, and he was controversially dropped from the leadership group at the end of the year. He also hit the headlines for the wrong reasons, with a dressing-room clash with teammate Daniel Chick one of a number of unsavoury stories to come out during the Eagles' annus horribillus. To his credit Embley responded well the following season, with a shift to a halfback role resulting in a fourth-place finish in the B&F, the best result of his career.

Embley was a reasonable performer during West Coast's poor run between 2008 and 2010, playing 62 of a possible 66 games and finishing in the top 10 of the Club Champion countdown each season, but with the club looking to rebuild its playing list it seemed he may be phased out. He then had a renaissance season in 2011, setting a career high for disposals and playing a major role in the side's sudden turnaround from wooden spooners to preliminary finalists.

As with so many other veterans, when the end came it came quickly. Embley missed the majority of the 2012 season with a shoulder injury and found himself in Swan Districts' colours for the first time in a decade. He then bounced between the seniors and Swans for much of 2013, with hamstring and foot injuries contributing to his poor form. Stranded on 249 games and left out of the senior side late in the season, he announced his retirement and, with the Eagles out of finals contention, was recalled for his 250th and final game in the last round along with fellow retiree Adam Selwood.

Embley appears on Channel Seven's WAFL coverage and co-owned a seafood restaurant with Dean Cox.[1] He also took on an assistant coaching role at Claremont.[2] Late in 2018, he was announced as an assistant coach for West Coast's inaugural AFL Women's side, scheduled to join the national competition in 2020.[3]

Retrieved from "https://eaglepedia.fandom.com/wiki/Andrew_Embley?oldid=33353"
Community content is available under CC-BY-SA unless otherwise noted.