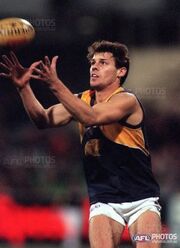 A strong-bodied forward, Donnelly had a great first season as a mature-age recruit and played 68 games in six years on the list.

Hailing from Subiaco, Andrew Donnelly was drafted by Sydney in 1992 and spent two seasons on the Swans’ list without playing an AFL game – he stayed in WA for the 1993 season and played reserves for Sydney in 1994.

Donnelly trained with Fremantle in the lead-up to their entry to the AFL but did not make their final squad.[1] Returning to the Lions, Donnelly won their best and fairest in 1995 and played in the losing grand final side, which was enough for West Coast to snap him up as a mature-age recruit in the 1996 pre-season draft.

Donnelly had an instant impact at AFL level, playing 20 games and kicking 28 goals for the year and helping to fill the void left by an out-of-form Peter Sumich. Donnelly’s performances in his debut season included a 25-touch, 4-goal game against the Demons and a 5-goal haul at the Gabba, and saw him win the club’s Rising Star award ahead of a couple of other well-performed youngsters like Chad Morrison and a bloke named Cousins, as well as finishing in the top ten in the Club Champion award.

Donnelly never quite hit the same heights again. He played just 10 games in 1997 and spent a bit of time back at Subiaco. 1998 was a little better, although injuries limited him to just 13 games he still managed to equal his career high with 5 goals in a narrow loss to the Saints. In 1999 he spent the first part of the year with the Lions before breaking into the senior side and playing the back half of the season and the finals series.

2000 was a similar story, although Donnelly managed 14 senior games and 15 goals, his highest tallies since his debut season, and kicked 6 goals in a fortnight against the Saints and Sydney late in the season. He battled a series of leg injuries throughout 2001 and was unable to break into the side, and announced his retirement from AFL and WAFL footy at the end of the year.

Donnelly went on to become the CEO of a national insurance brokering company which he founded while still playing for West Coast.

Retrieved from "https://eaglepedia.fandom.com/wiki/Andrew_Donnelly?oldid=32984"
Community content is available under CC-BY-SA unless otherwise noted.