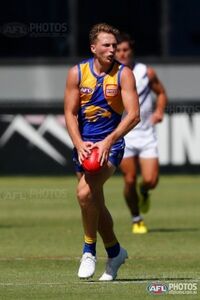 After playing TAC Cup for the Geelong Falcons, Witherden was drafted by the Lions early in the 2016 draft despite suffering a serious broken leg during his draft season. He played 53 games in his first three seasons in Brisbane, but was squeezed out of the lineup in 2020, adding just six more games.

With Shannon Hurn nearing retirement, West Coast approached Witherden and convinced the contracted defender to move West, securing a trade with the Lions on the final day of the trade period.

Retrieved from "https://eaglepedia.fandom.com/wiki/Alex_Witherden?oldid=35312"
Community content is available under CC-BY-SA unless otherwise noted.