West Coast Eagles Wiki
Register
Don't have an account?
Sign In
Advertisement
in: Players, Players from Claremont, Past players, Players who didn't play a senior game 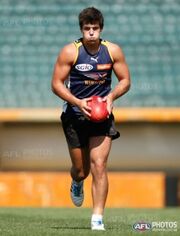 The son of dual premiership player Chris, Alec Waterman was a father-son selection in the 2014 draft, but was struck down by illness.

A strong-bodied midfielder, Waterman played under 16s and under 18s for Western Australia and was rated highly months out from the draft. However, he slipped during the year and when he was nominated as a father-son pick by the Eagles, no other club placed a bid on him. West Coast were then able to select him with a late pick.

After switching from Claremont due to the host club arrangement, Waterman performed well with East Perth in the first half of 2015. Unfortunately he was then struck down by glandular fever, keeping him out of action for the remainder of the year. He was dropped back to the rookie list for the 2016 season as he continued to struggle with the illness, which left him housebound and exhausted.[1]

At the end of 2016, with Waterman having been unable to return to the field, he was delisted.

After being forced to sit out of football for another full year, Waterman finally returned to playing duties in July 2018 with Claremont's reserves.[2] He spent 2019 and 2020 in the Tigers' senior side, kicking 45 goals from 22 games. Ahead of the 2021 season, Waterman was invited to train with Essendon, and was signed to the Bombers' rookie list after impressing during the pre-season.[3]

News: Waterman locked in as an Eagle