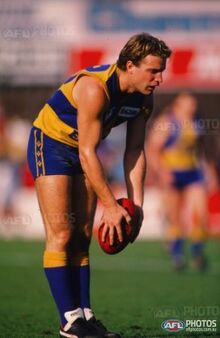 Hailing from Canberra, Adrian Barich was a junior rugby player before switching to Australian rules football and playing in an ACTAFL premiership with Manuka.

Barich was recruited west by the Perth Demons and played three seasons at Lathlain, finishing second in the club’s best and fairest in each year, before being selected in the inaugural West Coast Eagles squad in 1987.

The burly utility made his VFL debut in the club’s first ever game and played 14 games for the year, the best of which came in the final round when he kicked 4 goals from 25 possessions against St Kilda. Barich added another 11 games in 1988 and 14 in 1989, but fared poorly when Mick Malthouse took the reins, spending the entire 1990 season in the WAFL.

His luck was only a little better in 1991. Barich played six games during the regular season, and was called up from Perth for the preliminary final win over Geelong but was dropped for the grand final the following week to make way for the returning Chris Mainwaring.

Barich played just one more game for West Coast, a win over Richmond, but had a hand in the 1992 premiership after he and Phil Scott penned an emotional letter to the players in the lead-up to the grand final, emphasising the importance that a win would have to players that had been at the club from the beginning.

After his AFL career finished Barich played two more seasons at Perth, finally winning the elusive B&F in 1994. He then switched codes to join the fledgling rugby league side Western Reds in 1995, although he did not play a first-grade game.

Barich is now a prolific media figure in Perth, appearing on Channel 7 and Mix 94.5.

Retrieved from "https://eaglepedia.fandom.com/wiki/Adrian_Barich?oldid=23004"
Community content is available under CC-BY-SA unless otherwise noted.