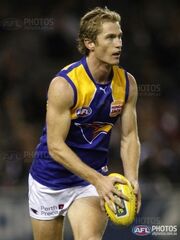 The older brother of teammate Scott and Geelong captain Joel, and twin brother of former Brisbane player Troy, Adam Selwood was a handy run-with player and defender across 11 seasons.

Taken with West Coast's final selection in the 2002 draft, long after twin brother Troy had been picked by Brisbane, Selwood played most of the 2003 season with East Perth. He was called up for a debut late in the year against the Crows, and then again for the elimination final against the Crows several weeks later. After starting the 2004 season with the Royals, Selwood played three games and looked promising before a bout of osteitis pubis curtailed his season.

The tough-as-nails utility became a regular in 2005, playing 18 games in the regular season and earning a rising star nomination against Brisbane for his tagging job on Nigel Lappin (one week after brother Troy had been nominated). Selwood was knocked out in a clash with Mark Ricciuto in the final home-and-away round, missing the qualifying final against Sydney but returning for the prelim against the Crows to blanket prime mover Scott Thompson. He held his spot for the grand final but had little impact in the loss to the Swans.

In 2006 Selwood played every game, generally in defence with occasional stints as a tagging midfielder. His grand final was one of his better games, picking up 26 possessions as West Coast won their third flag. At the end of the season Selwood finished fifth in the best and fairest.

He backed that up in 2007 by playing 23 games, shifting into the midfield stopper role on a more regular basis as Tyson Stenglein slowed, and finishing third in the Club Champion award. In 2008, as he was joined at the club by youngest brother Scott, Selwood again played every game, taking on a more senior role as other premiership players like Judd, Cousins and Jones departed and again finishing top three in the best and fairest.

Selwood continued on as a regular member of the team in 2009, chalking up his 100th game early in the season in a loss to Hawthorn in Launceston. Now a full-time member of the midfield, he averaged more than 24 possessions and finished sixth in the best and fairest.

For the first time in several years, Selwood missed large chunks of the back half of the season due to injury - managing just five of the final 11 games as West Coast plummeted to their first wooden spoon. He bounced back in 2011 to play every game, typically as a defender as Scott took over the tagging duties. He was a solid contributor again in 2012, despite missing a handful of matches due to hand and arm injuries.

Never the quickest player, Selwood's lack of pace became dramatically more noticeable in 2013. No longer an automatic selection, Selwood found himself regularly in the East Perth line-up for the first time since 2004. He played just nine games for the year, and announced his retirement prior to the final round game against Adelaide. Recalled for a farewell appearance in that game, he started as the substitute and had little impact as the Eagles were thrashed, an ignominious farewell for he and fellow retiree Andrew Embley.

Selwood took on a role as a development coach under new head coach Adam Simpson for 2014. He was appointed coach of the newly-formed multicultural academy in 2017.

News: Selwood back as development coach

Retrieved from "https://eaglepedia.fandom.com/wiki/Adam_Selwood?oldid=28006"
Community content is available under CC-BY-SA unless otherwise noted.