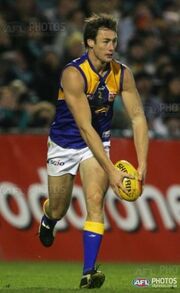 A key defender in the Eagles' 2006 premiership side, Adam Hunter was often swung forward during a match to great effect.

Originally from South Bunbury, Adam Hunter was picked up in the 1999 draft along with some other promising local key position products in Darren Glass and Travis Gaspar.

Given a debut in the final round of the 2000 season, Hunter was then in and out of the side in 2001, playing nine games for the year. He became more of a full-time member of the senior team in 2002, playing 17 games for the year. His best game came in a midseason win against Adelaide when he picked up 24 possessions and a goal.

In 2003, Hunter played 20 games for the year. His 2004 was interrupted by injury, with a late start to the year and then a hamstring problem midseason, but he still managed to play 16 games.

It was in 2005 that Hunter really stamped himself on the team. With Glen Jakovich and Ashley McIntosh retired, Hunter began to take responsibility for a key forward on a regular basis, despite often being undersized. He also began to cement his reputation as a dangerous swingman, often being thrown forward where his ability to take a contested mark proved invaluable. Hunter kicked 14 goals for the year, including five goals during the finals. He provided one of the highlights of the season when he took a huge pack mark and then converted to put the Eagles in front of Sydney late in the qualifying final, and then kicked two important second-half goals in the grand final. He was rewarded with his first top-10 finish in the Club Champion award, but sadly not a premiership medal.

Hunter’s contribution only increased in 2006, with that rat-tailed defender swinging forward even more often and responding with 29 goals, including a couple of bags of four during the regular season and then back-to-back four goal hauls in the semi-final and preliminary final. He only managed one goal during the grand final but it was a critical one, receiving the handpass and then shepherd from Daniel Chick to put the Eagles up by 7 late in the match.

Hunter was a rock in 2007, playing every game and finishing second in the best and fairest behind another rock in Glass. He unfortunately missed a couple of large chunks of 2008, with a knee injury and then a shoulder injury limiting him to just 11 games as the team plunged out of finals contention early.

That shoulder injury ended up bringing a premature end to Hunter’s career, the fan favourite managing just eight games in 2009 and announcing his retirement at the end of the year.

Hunter returned to his junior club, South Bunbury, for the 2010 season. He signed for Swan Districts in 2011 but could manage just seven league games. Hunter returned to South Bunbury during the 2014 season after beginning the year with Great Northern club Chapman Valley.[1] Following a three-year stint with Whitford, he switched to fellow amateur club Carlisle ahead of the 2018 season.[2]

Retrieved from "https://eaglepedia.fandom.com/wiki/Adam_Hunter?oldid=32995"
Community content is available under CC-BY-SA unless otherwise noted.