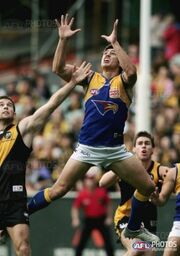 The Samoan-born Edwards spent his first two seasons at West Coast playing for West Perth and then Swan Districts in the WAFL. He was delisted but picked up for a third season, and given a debut after a great run with Swans when he kicked 14 goals in a month. Edwards immediately impressed with 8 marks and 2 goals against the Tigers, but failed to kick a goal in the next three matches and was sent back to Swans. After the latter part of his WAFL season was injury-interrupted, Edwards was not given another contract.

Edwards spent 2006 playing for Frankston in the VFL. After kicking 100 goals and winning the VFL's best and fairest, North Melbourne drafted him with a late-round pick.

At the Roos, Edwards kicked 122 goals in 78 games over six seasons. He fell out of favour in 2012 and was traded to Richmond at the end of the season.

Edwards played 9 games for Richmond in 2013, proving an effective foil for star forward Jack Riewoldt but was delisted at the end of the following season after adding just three more games to his tally.

Edwards joined Mornington Peninsula club Pines when his AFL career ended, where he remained as of 2018.

Retrieved from "https://eaglepedia.fandom.com/wiki/Aaron_Edwards?oldid=28014"
Community content is available under CC-BY-SA unless otherwise noted.