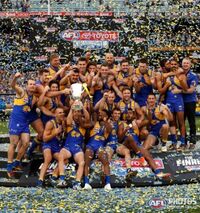 Widely expected to fall off the pace following the retirement of a number of veterans including Matt Priddis, West Coast lost their first match at the brand-new Perth Stadium but went on an eye-catching ten-game winning streak to head into the mid-season bye atop the ladder. Despite regular hiccups including injuries to veteran forwards Josh Kennedy, Jack Darling and Mark LeCras, a devastating second ACL rupture to ruckman Nic Naitanui and the season-ending suspension handed to Andrew Gaff following his inexplicable haymaker to Fremantle youngster Andrew Brayshaw, the Eagles were able to finish in second spot and earn a vital double chance in the finals. Further disaster struck when reliable defender Brad Sheppard injured a hamstring in the first final, but the side was able to overcome every obstacle and defeat Collingwood in the Grand Final to record a memorable fourth premiership.

Skipper Shannon Hurn led the way, putting in a career-best season and earning a maiden All-Australian berth alongside Gaff and Jeremy McGovern. The Eagles also got great drive from a relatively unsung midfield, with Elliot Yeo winning a second straight Best and Fairest, finishing ahead of a reborn Jack Redden. West Coast also benefited from an influx of youth, with eight players making their AFL debuts during the season including premiership players Willie Rioli, Liam Ryan and Daniel Venables.

Indigenous
Add a photo to this gallery

Retrieved from "https://eaglepedia.fandom.com/wiki/2018_season?oldid=30236"
Community content is available under CC-BY-SA unless otherwise noted.